A city tour of Arequipa, the White City of Peru

Arequipa may be second to Lima in terms of population size and economic activity, and behind both Cusco and Lima for visitor numbers, but it is a worthy rival to both cities in terms of cuisine, historical significance and location. Once referred to as ‘The Independent Republic of Arequipa’ by anthropologist Thomas Love, the city has a strong regional identity and exudes pride and self-confidence. Arequipa has much to be proud about. It played a vital role in putting Peru firmly on the gastronomic world map, which in turn was key in the bringing about the country’s cultural renaissance. A tour of Arequipa is well worth adding to any travel itinerary in Peru. 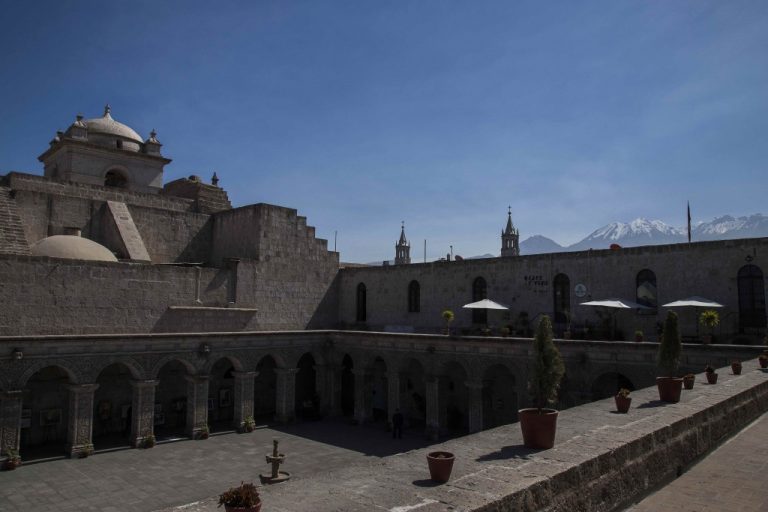 If you visit Claustros de la Compania, have lunch at La Benita, one of the best picanterias (traditional Arequipenian restaurant)

Nestled between three looming volcanoes, this UNESCO World Heritage Site-listed city offers travellers plenty to visit and a magnificent cityscape. Arequipa is also a popular launchpad for exploring some of the region’s top hiking and adventure attractions. Sitting at 2,335 metres above sea level, the city also offers travellers gentle acclimatisation before heading off to higher elevations such as Cusco and Puno. In this post, Daniel, one of our local experts in Peru, shares in his own words a brief history of Arequipa, along with some of his favourite things to visit in this gem of a city. All of his enticing suggestions can easily be combined into a city tour of Arequipa:

“Last time I touched down in Arequipa was during a swift stopover between the cities of Cusco and Lima. To my surprise, I got stopped at customs because the authorities had detected fresh fruit in my hand luggage. My efforts to hold on to my healthy snacks were in vain however, and despite my many assurances that I wasn’t even going to be leaving the airport, my fruit was confiscated. Upon reflection, I think this is a good example of how Arequipenians look after their land: the customs’ official involved was only trying to prevent the introduction of pests and diseases that could wipe out entire crops. 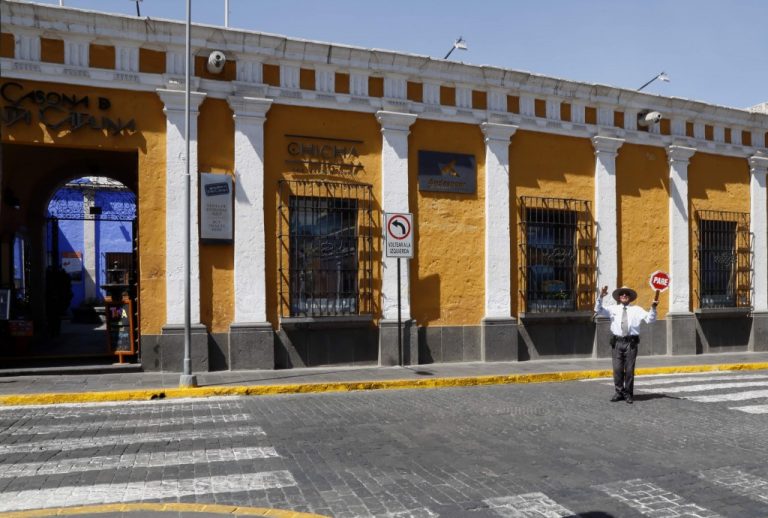 Eloy controls the traffic everyday at this street since 2005 in Arequipa, Peru. In case you don’t see him, it might have something to do with his age: 78 years old!

Arequipenians are full of gestures that demonstrate their love for their land and regional pride. They have even invented their own passport, leading other Peruvians to joke that you need a different passport to enter the country’s second city. Locals here want to promote their great city, and as such make excellent hosts.

Arequipa was founded by the Spanish in 1540 and originally went by the rather labourious name of ‘Villa Hermosa de la Asunción de Nuestra Señora del Valle de Arequipa’. Luckily, nowadays the city is more likely to be referred to as ‘La Cuidad Blanca’, or ‘The White City’. Its unique white buildings are made from a white volcanic rock called sillar, and provide a beautiful complement to the snow-capped volcanic peaks that loom in the distance. Given that Arequipa usually boasts bright blue skies, the city offers visitors many picture-perfect views and cityscapes. 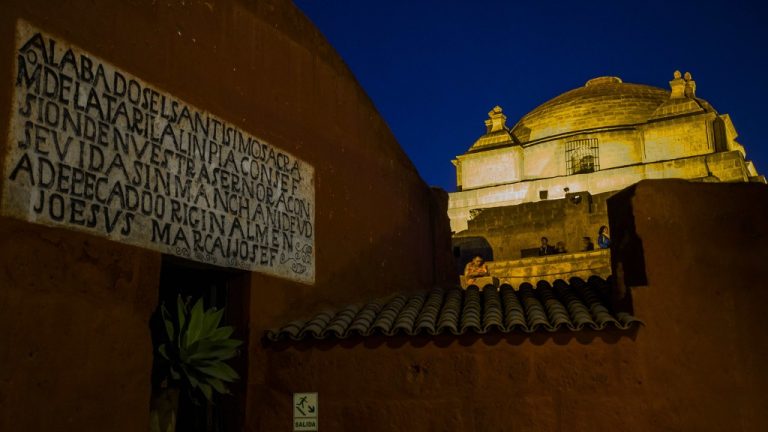 Contrast of colours in the monastery shows. Night visits are totally recommended

Usually featuring at the top of any traveller’s to-do list during a tour of Arequipa, is Santa Catalina Monastery, located in the historic centre of the city. Built in 1580, this walled citadel boasts cloisters, plazas, a gallery and a chapel as well as beautiful cobblestone streets that link it all together. This huge complex, built of white volcanic stone and covering more than 20,000 m2, also includes red and blue painted walls that add a lively injection of colour to the historic heart of Arequipa. Whilst in the neighbourhood, don’t forget to look out for the city’s iconic traffic officer, located at any of the two intersections right in front of the monastery. He can even be spotted on Google Street View!

The city’s majestic 17th century’s cathedral, also built of sillar, dominates the central ‘Plaza de Armas’. The cathedral houses a museum which provides a great introduction to the history of the city, with exhibits that include paintings, clothing and jewellery. From the outside alone, the cathedral can’t fail to dazzle travellers with Arequipa’s iconic volcano, El Misti, rising behind it. 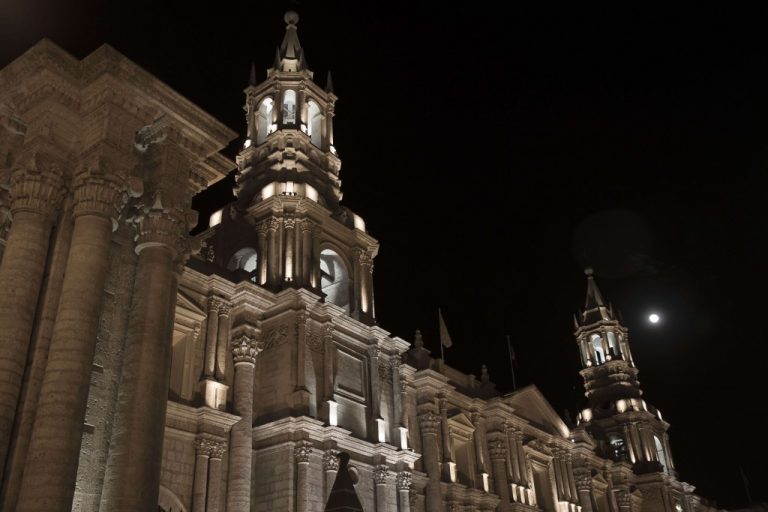 White ashlar is all over the city of Arequipa, but it is more noticeable at the monumental cathedral

For more postcard views of this charming city, it is worth venturing away from the centre and into the neighbourhood of Yanahuara. This calm quarter is home to a popular viewpoint, built in the 19th century and featuring arches engraved with words from some of Arequipa’s most famous inhabitants. As well as providing its visitors with unrivalled views of El Misti Volcano and the city itself, Yanahuara is also home to many small shops selling ‘queso helado’, a tasty traditional ice-cream that is well worth a try.

A classic postcard- Arequipa from the Yanahuana’s viewpoint, with the Misti Volcano in the background

Talking of ice and the city’s most famous residents, Arequipa is also home to Juanita, the Ice Maiden. This sacrificed Inca girl was found on the slopes of Ampato Volcano. Now resting in the Museo de Reliquias Andinas, Juanita is another of the city’s many treasures. She was given to the ancient gods in sacrifice, possibly in an attempt to calm down the region’s many land tremors.

During your tour of Arequipa, there are plenty of exciting eateries to sate your appetite and refuel your body. As a renowned heaven for foodies, Arequipa’s many picanterias are reason alone to visit the city. Deriving their name from the word picante, which means spicy, these local restaurants are home to Arequipa’s long list of local specialities. It’s also worth trying a refreshing glass of ‘chicha de jora‘, a corn beer that’s been enjoyed in the Andean highlands since before the time of the Incas.

A stroll around Arequipa’s many well-maintained plazas (town squares) is a great way to digest after savouring the city’s delicacies. The plazas‘ benches offer an ideal opportunity to rest one’s legs, shelter from the dazzling sun and partake in a spot of people watching. Arequipa boasts an impressive list of churches, and many of these can be found bordering the city’s delightful plazas. 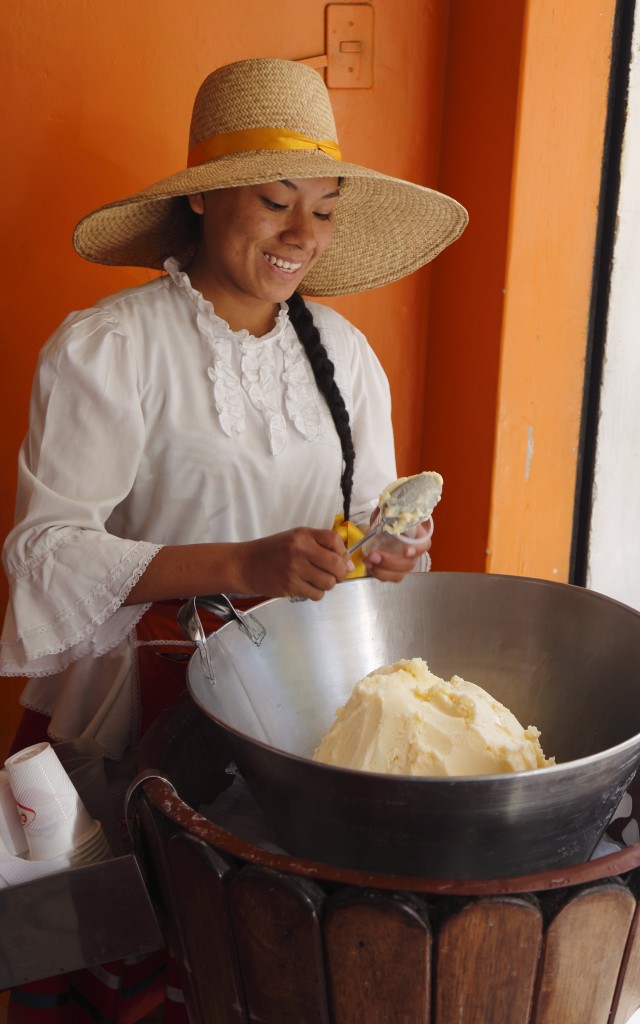 Queso helado might look like any regular vanilla ice cream, but actually, it is pure milk and sugar

I have tried to keep this post as short and sweet as possible, but I hope I was still able to exemplify why Arequipa is a source of strong regional pride. After a tour of Arequipa, anyone who falls in love with this beautiful land and decides to move here can buy a passport from most souvenir shops!”

This post was a contribution by Daniel, a local expert from our trusted tour operator in Peru. To know more about this and other travel experiences in Peru, you can visit our Peru Holidays page and send a travel request.

We use cookies on our website to give you the most relevant experience by remembering your preferences and repeat visits. By clicking “Accept All”, you consent to the use of ALL the cookies. However, you may visit "Cookie Settings" to provide a controlled consent.
Cookie SettingsAccept All
Manage consent

This website uses cookies to improve your experience while you navigate through the website. Out of these, the cookies that are categorized as necessary are stored on your browser as they are essential for the working of basic functionalities of the website. We also use third-party cookies that help us analyze and understand how you use this website. These cookies will be stored in your browser only with your consent. You also have the option to opt-out of these cookies. But opting out of some of these cookies may affect your browsing experience.
Necessary Always Enabled
Necessary cookies are absolutely essential for the website to function properly. These cookies ensure basic functionalities and security features of the website, anonymously.
Functional
Functional cookies help to perform certain functionalities like sharing the content of the website on social media platforms, collect feedbacks, and other third-party features.
Performance
Performance cookies are used to understand and analyze the key performance indexes of the website which helps in delivering a better user experience for the visitors.
Analytics
Analytical cookies are used to understand how visitors interact with the website. These cookies help provide information on metrics the number of visitors, bounce rate, traffic source, etc.
Advertisement
Advertisement cookies are used to provide visitors with relevant ads and marketing campaigns. These cookies track visitors across websites and collect information to provide customized ads.
Others
Other uncategorized cookies are those that are being analyzed and have not been classified into a category as yet.
SAVE & ACCEPT
Loading Comments...