Rural adventures in La Calera – A homestay in Ecuador

Happy Travellers Ann and Geoff spent an incredible five weeks travelling in Ecuador with our trusted local partner. During their first three and a half weeks, they opted to stay with a local family in the small traditional village of La Calera, just 3kms from the town of Cotacachi in the north of the county. Here, they really got into the swing of local daily life and were able to volunteer their time helping out at the local school and women’s cooperative.

In this first post of a blog series of three, Ann and Geoff give us a first-hand account of their rewarding and unforgettable homestay in Ecuador:

Our host family in La Calera

Every morning we woke up to the most astounding views. Through our window we could see the Cotacachi Volcano, and on the opposite side of the valley, the Imbabura Volcano was also visible. The indigenous family we stayed with were so friendly that we all got on extremely well, despite their first language being Kitchwa and our Spanish being basic to say the least. We were hosted by Delia, Oswaldo and their children Yupanki, 14, and Naya, 6.

Delia worked all hours of the day, washing enormous mounds of clothes outside in cold water, cooking great pots of soup and embroidering beautiful blouses. She also worked as a cleaner for a family in Cotacachi. Her husband, Oswaldo, was away for most of the week, as he worked in Quito as a gardener. He set off at 3am on Monday mornings to travel by bus for four hours before work. He came back on Friday evenings and over the weekend he helped with household jobs and looked after the pigs and guinea pigs, while still finding time to play football for a local team! The whole family were wild about football and Oswaldo and Yupanki play together in the local league in Cotacachi.

Our host family in La Calera- Delia, Naya, Yupanki and Oswaldo, for our homestay in Ecuador

Getting ready to celebrate Tarpuy Raymi, ‘The Sowing of the Seeds’ festival, one of the most importat in La Calera, Ecuador

During the carnival parade in La Calera, with the band playing and people singing and dancing, near Otavalo in Ecuador

Most of the ladies in La Calera dress in their traditional costume every day, and both men and women wear their hair in one long plait down their backs. We were the only outsiders in the village but we were made welcome by nearly everyone – just a couple of older men didn’t appear to be enamoured with foreigners!

‘The Sowing of the Seeds’ festival

During the second weekend of our homestay in La Calera, the whole village celebrated Tarpuy Raymi: “The Sowing of the Seeds” festival. It is one of the most important festivals of the year and the women spent several days preparing and cooking massive amounts of celebratory foods. Although the women of the village always wear traditional costume, they put on special jewellery and beautiful hats for this festive occasion.

The carnival parade walked for miles around the village, with the band playing and people singing and dancing. There were even a few dodgy fireworks to add to the occasion! The procession ended at the village green where beer and food tents had been set up. There was plenty of music and entertainment to enjoy, including dancing contests between local villages. Everyone got into the party mood, and the celebrations continued for the next two days!

Joining in with daily community life

In addition to joining in these village celebrations, we got involved in local community life in other ways. We were able to help at the tiny local school, by volunteering our time to teach English to the children. There were just 16 children in the youngest class, and only 9 in the class above, all with differing ages and abilities. What they all had in common though was a desire to learn!

Being invited into the school and getting to know the children was such a rewarding experience. It was also an eye-opening one: during our last session at the school, four of the children didn’t show up. This happens on a regular basis unfortunately, because they are needed to help on their families’ farms and this is seen as the priority. 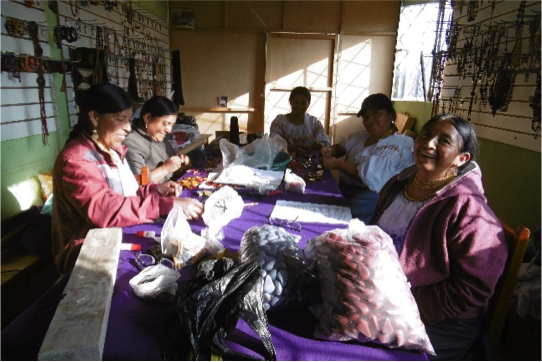 We also spent some time at the local women’s cooperative. These five enterprising ladies worked most days making jewellery from local seeds, sewing bags to put the jewellery in and crocheting off-cuts of leather together to create scarves. You could not meet a happier group of people and although we could only communicate using the smattering of Spanish we knew, we all had an hysterically funny time together.

As well as joining in with so many activities within the community, we were also able to spend time exploring the surrounding countryside. Local buses from Cotacachi and Otavalo to outlying areas are frequent and extremely cheap, making it easy to get around. Being situated high in the Andes and surrounded by volcanoes and mountains, the scenery here is spectacular.

A day trip to Lagunas de Mojanda, near Otavalo in rural Ecuador

During a hiking excursion to the Cuicocha Lagoon near Otavalo, in Ecuador

The beautiful Laguna Cuicocha in the Andes mountains, Ecuador

We hiked around the sacred Laguna Cuicocha and the Lagunas de Mojanda, visited the Parque de Condor and Cascada Peguche, and climbed up to Imbabura Nan (trekking route to a viewpoint). Along the way, we met many local people and continued to learn about their customs and culture.

Our time spent in La Calera and its surroundings was vastly rewarding and an unforgettable experience.

On the next leg of their incredible tour of Ecuador, Happy Travellers Ann and Geoff headed into the Amazon rainforest. There they got to enjoy a completely different side of this diverse country. Staying within the Yasuni National Park, a renowned hotspot for biodiversity, Ann and Geoff experienced a rewarding and wildlife-rich example of indigenous tourism in Ecuador. Stay tuned to read all about it next week!

To learn more about the activities and adventures available in the Ecuador, you can visit our Ecuador Holidays page and send a travel enquiry.