What I Learned About Urbanization in Costa Rica

This is the fourth in a series of blog posts about ecotourism and rural tourism in Costa Rica. At the end of last year we organised a tour for Hannah, Kasi and Simone, bloggers and members of the Ethical Influencer Network. Last month, Simone wrote about their experience on the organic farm, Finca Sura. Now, Kasi is back to tell us about urbanization in Costa Rica’s thriving capital city – San Jose.

Rapid urbanization is a development pattern that’s sweeping the globe. Cities, which make up about 5% of the world’s landmass, account for more than 70% of global energy consumption and emissions. At first pass, Costa Rica may seem exempt from this trend. It’s a remote getaway known to tourists for unspoiled beaches, surfing, zen escapes and going off the grid. But even the land of Namaste hasn’t gone untouched.

For native Costa Ricans, this global trend manifests in different ways at the local level. On my trip with Sumak Travel, I had the opportunity to visit San Jose and see how. 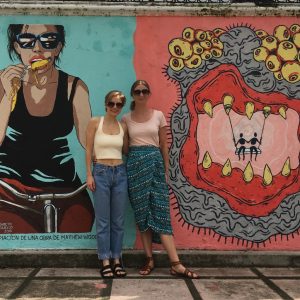 What caused this tiny, happy country to grow so much?

I can’t delve into the trends until you know what spurred the rapid growth. It started with the development and expansion of housing in the 1940s and ballooned in the late 90s and early aughts when Nicaraguans began immigrating to Costa Rica in droves. They were seeking a better education for their kids and a higher standard of living than their government was offering at the time.

On top of this population influx, the Costa Rican government was making significant strides to reduce poverty. Additionally, local leaders committed to cleaning up the environment and the deforestation rate actually began to slow (as opposed to almost everywhere else in the world). Plus, the country’s alluring natural habitat, abundant water and happiness factor continued to attract new development.

Action in the urban core

The thing that’s distinct about Costa Rica’s brand of urbanization is how concentrated it is. For instance, most countries have a few urban centers, but in Costa Rica, development is hyper-concentrated in the ‘Greater Metropolitan Area’ or – colloquially, the GMA.

San Jose sits at the center of the GMA and the urban area flows out from there – pretty much into lush rainforests that are dotted with smaller, more rural towns. The GMA started to get so dense that in 2007, The Tico Times reported that 59% of Costa Rica’s population lived there and cautioned that San Jose wasn’t prepared to accommodate the growth (for reference: the GMA only makes up 4% of the land in the country).

In the same article, Isabel Roman, a coordinator at State of the Nation, called it “disorganized development” while Kevin Casas, Costa Rica’s Minister of Planning at the time, said the lack of organization was causing serious growth issues. However, he also went on to say that: “Urbanization can have the effect of freeing people, allowing them to express themselves, to organize politically and socially.”

My perspective on urbanization

And organize they have. At least that’s the picture I saw in the few days we spent in San Jose. From an outsider’s perspective, a few things stood out.

First, Costa Rica has distinctive sub-neighborhoods. The one we explored the most was Barrio Escalante, where we dined at a progressive plant-based restaurant called Al Mercat, and wandered into haunts selling artisan goods, local coffee, chocolate and craft beer. This particular neighborhood felt hip, while others felt more modern. One was even distinctively punk. All had nightlife offerings and were within walking (or ubering) distance from the city center – which is packed with museums, historical buildings and a small but thriving street art culture. If you’re into the party scene, the best way to see the city is on a highlight party bus tour offered by Carpe Chepe. You get a little city knowledge mixed with a good dose of booze.

Second, Costa Rica sorted out its planning issues. It didn’t seem disorganized like the 2007 Tico article mentioned. So they must have figured it out in recent years. Urban infrastructure was strong, especially surrounding the capital center. Sidewalks were modern and clean, park spaces were well maintained, public sculptures were diverse and residents were utilizing the new bike share program. Only when we ventured outside the center did the infrastructure begin to break down a bit, but even then it was charming and distinctive. This is where the street art began and vintage shops abounded (read: What I learned about secondhand clothing in Costa Rica). The only thing that seemed a little fuzzy were the railways that passed through sections of the outlying neighborhoods.

Lastly, they haven’t forgotten history with their development. On our last day, we did a walking tour with Free Tours San Jose and got a glimpse into Costa Rica’s heritage. I saw prominent monuments, like the one of Simon Bolivar, and buildings that were well-maintained. One was even being cleaned and re-painted while we watched. This city also houses a little-known artifact – a piece of the Berlin Wall that’s inconspicuously housed in the back courtyard of the more distinctive Foreign Ministry building. Both things – the preservation of national identity and reverence for global history – are uniquely Costa Rican and compelling reasons to visit its capital city.

Buildings in the city center, National Theatre of Costa Rica

A piece of the Berlin Wall in San Jose, Costa Rica

Kasi writes about ethical fashion for the mainstream consumer at thepeahen.com. She is a member of the Ethical Influencer Network – a global community of writers and creatives committed to promoting conscious consumerism. See more pictures from the trip on Instagram: #ethicalinfluencersxsumaktravel

– What I Learned About Slow and Sustainable Food in Costa Rica